Back in 1999, I did a mail interview with Derek Powazek, who at the time was one of the first bloggers (before it was even called “blog”), and, I daresay, one of the main players behind the blogging r-/evolution. His work with fray and other projects was one of the main inspirations behind things I did at the time, like the little text I wrote about 10 days in France, the summer of 1999. That page is a graphic homage to the stuff that was on fray at the time, albeit not nearly as good. If I remember correctly, Powazek was also one of the founders of blogger, which was probably the earliest good free blogging service. At least it was via PowazekI first heard about it.
Anyway, once again, Powazek enters the fray (ho-ho) with a SXSW commentary, wherein he adresses that pet peeve of mine: semi-corporate entities that does nothing but trying to maintain a company-artist status quo, where the artist is constantly manacled, hampered and used up. Powazek, as an artist-of-sorts, puts it in plain text:

Until we (users, industry groups, lawyers, and politicians) finally make a clear legal and procedural distinction between copying a work for noncommercial creation of new works (like mashups or backups) and wholesale piracy for profit (like duplicating a work for the purpose of resale), we’re just going to keep shouting at each other in conference rooms and newspapers, and real innovation will never get made.

I couldn’t agree more. Piracy for profit is near-accepted, whereas small-time downloaders are hunted down. And god-damn the poor bastard who dare sample without clearance: onto him/her shall the hounds be released. Exchange should be easier, and whatever MPAA & RIAA might say: they are NOT there to protect the rights of the artists; they are there to protect the assets of the industry.

Today: Orchestral Manoeuvres in the Dark – Pretending to See the Future
Now, back in 1982-83, I think, I bought Architecture & Morality by OMD (as they are usually called). I must have been about 15 at the time. At any rate, they were kind of grouped together with bands like Ultravox, Depeche Mode, Simple Minds and such. And the genre in Sweden was called, broadly, “synth”. A much besmirched genre it was, too, later on with dubious connections to the New Romantics genre (a genre that generally encompassed what we called “synth”). But unlike the aforementioned bands, OMD sounded murky and glum. Possibly, this had to do with the use of the first Emulator or some such beast, generating lo-fi choral backgrounds. I’m not sure I really liked them, but being 15, it was nice being difficult.
But now, more than 20 years later, I hear those songs differently: like moody punk played on synthesizers, like post punk without the aggro, but with the emo. The earliest OMD songs has not only aged well, they have matured, and in the Peel sessions version that I listened to when biking thru the snow, the roughness of live mixes oh-so-well with the remains of ’77 punk and the emergence of the synthesizer as a pop instrument.

Today: Who Made Who – Green Days

Review: it worked perfectly as bike musik. A bit pumpin’ and humpin’, which made my sub-zero huffing more forgettable.

Mark Mothersbaugh is a great man, I tells ya. Not only was he in DEVO, one of the hep-est bands in the history of the universe, but he’s also a highly insightful chap who makes film music. This morning, before going to work, I read an interview with the man in Believer, McSweeney’s brill textmag. Buy it if you can find it! As I’m always looking for reasons to slag the major media corporations, here’s a quote:

Because today, if a record company collapsed, who the hell would be losing, except the people who were out of jobs? Consumers aren’t going to be losers. And if you’re in music just to become a big, fat rock star, then probably I don’t like your music to begin with. […] And if you get rid of a lot of the poseurs by destroying record companies, maybe it’s a good trade-off.

And off Mothersbaugh goes to view an exclusive screening of the latest movie he scored, Herbie: Fully Loaded, with the words:

Listen, I better get going. It’s time for me to watch this screening. If you want, I could leave the phone on while I’m inside. that way, you can tape the soundtrack and put it on the black market in China. What do you think?

This saturday, 2 days ago, the first Kontra-musik festival took place in Malmö. Fool that I am, I had a whole hawg to drink before going there, but it was still a very enjoyable event, dizziness notwithstanding. The lighting was beautiful, and the sound great. The live artists were swell, and especially IsolÃ©e was a big surprise. Cockrockdisco with Jason Forrest was, as expected, fun drillcore of the highest order…
Here’s an elektronikkk-looking pic I shot of IsolÃ©e, btw: 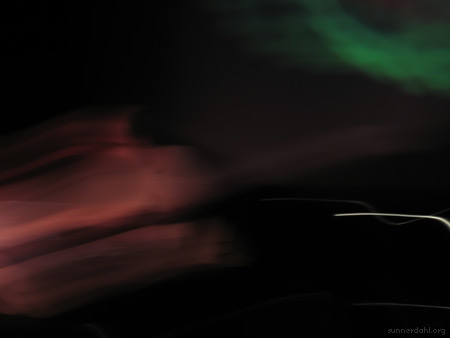 First off, I moved back to the old theme. The reason? It looked like crap in IE. Again!
Now then: the massive open art project UbuWeb is no more. At any rate, it will no longer be updated:

The UbuWeb Project — a decade-long experiment in radical distribution of avant-garde materials — has finished. Founded in 1996, the project has been a success beyond anyone’s wildest expectations. As of Spring, 2005, it averaged over 10,000 visitors daily and hosts nearly a terabyte of artworks in all media by over 500 artists.
The site will be donated to a university shortly, where it will be archived intact for posterity. Please note that the site will no longer be updated. A URL linking to the archive will be posted on this page.

A big THANK-YOU goes out to the principals, as well as the artists. I know that much of the material was/is probably copyrighted, and infringed upon, but it seems most of the artists have been very supportive, and showed that sharing the wealth isn’t necessary something that will COST you money. Having followed UbuWeb since 1999 or so, I’m sad to see it staled. But there are other projects ahead, I’m sure. For example, you can still listen to Kenny G’s fine web radio shows on WMFU. You should. I’ve found lots of music through Ken, and I believe you might too. 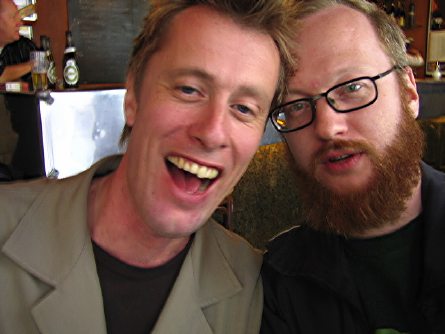 Two weeks ago, me and old compadre Björn was in Copenhagen. Jollities, smørrebrød, mooning, aquavit & beer was the flava of the trip. A trip to Eiffel Bar is mandatory!