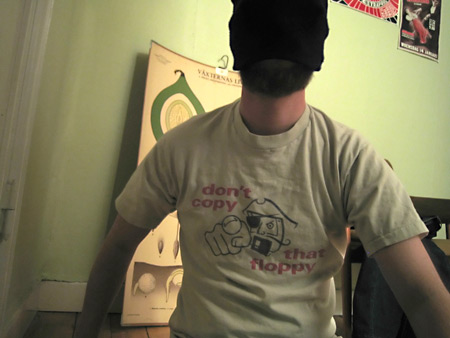 These past few weeks has seen the start of a battle between Swedish anti-piracy groups/Corporate shills/general numbnuts and pro-piracy interests/hackers/general law dilettantes. My take? Shove it, you big corps, you! I think it’s pretty clear that I think artists should get paid, and companies who work for artists as well. But what I don’t think, is that it’s a good thing to stigmatize file sharers.
Sure, I’ve downloaded my share. Let’s see, what movies did I last “steal” from those companies? Last of England and Jubilee by Derek Jarman, 12 Stories About John Zorn by Claudia Heuermann and finally La Société du spectacle by Guy Debord. Oh, and that Bruce Haack documentary by Philip Anagnos. I ask you, why the FUCK would I spend time downloading mainstream crapola that I can rent in any store for 2 bucks. And why the fuck would YOU do anything of the sort, either? Forgive me, but clogging the networks with readily available Hollywood schlock is just plain insipid & boring. I’d rather go to archive.org and dl some ephemera without being stigmatized by the “Biz”. That said, I actually rented a Hollywood movie yesterday. Not for the first time, not for the last, I’m sure, but the shenanigans of the movie industry will make me think twice before renting or buying from them again.
Did I mention I just ordered yet another TV series today?

Basically: die, you dinosaurs, die. An industry that was once exciting and happening (Columbia’s Odyssey branch even tried to sell Stockhausen and musique concrÃ¨te to HIPPIES in the late 60s, for chrissakes!) is now but a qliphoth. A husk, void of what was once good.

Would anyone dare today?