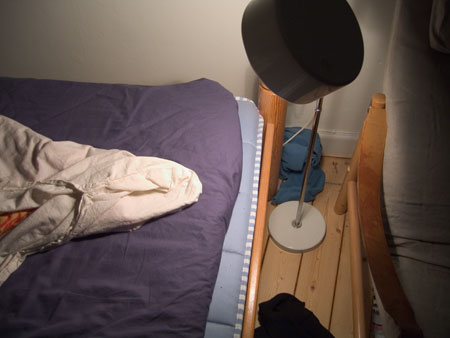 My friend Naffa, who lives on Zanzibar those days, is visiting me. Actually, he’s been living there for almost a decade now, running a small-ish cabinet making business, and a sawmill. I don’t know if the mill is up and running yet, though. Any which way, he’s in Sweden again for a combined vacation and machine-buying trip. Apparently, those old machines he bought when first moving there are a bit on the run-down side. Hence, he’s going to carpentry machinery auctions.

I’ve often been thinking of going to Zanzibar to visit him, but first, I was short of time, and now money. That’s the way things always seem to be. Having read Ryszard Kapuscinski’s brilliant The Shadow of the Sun, made me even more interested in going to Zanzibar. Or somewhere in Africa in general. As a westerner, I believe it’s the only part of the world that is still shrouded in a vast mysterious veil. Perhaps I’m just romanticising & exoticising, but think about it: how often does one read about the non-arab (I use the term loosely as all hell) Africa in the dailies? Heck, the Rwanda genocide had been going on for months before it gained any headlines in the West, and even then those headlines faded fast. In a Europe that lost part of its mystery with the decline of the East Bloc, I believe we are in dire need of places that feel like they belong in a story. Adventure. Mystery. Suspense. Danger. Perhaps it is only to be found in fantasy, but Iâ€™d like to experience that feeling some day again, much like I did when me and Naffa did our big Europe trip ’87 – ’88. But maybe I’m just too afraid, and too lazy. Fuck it.

What the fuck was I supposed to write?