I’m in bed, at home, convalescing it up after an operation. Since I’m not really able to sit or walk, I’m looking at old stuff, updating and whatnot.
The personal web page used to be a full service thing: the blog, the gallery, the CV, the contact form, the discussion forum. Now: not so much. In general, we are now disparately posting everything on a plethora of specialised social networks, for good and for bad. I mean, it’s an equal opportunity thing, not needing to have your own domain, the technical know-how, the problem of getting your thoughts out, but it is also a very fickle way of presenting your digital persona. Who knows what lies in the future: who will own your stuff, who will control your things, who will censor your thoughts?

I’m not saying this will happen, and I’m not going to go back to the way things were, certainly.

All these tiny personal things everywhere should maybe be reposted somewhere central. Tied together. Saved for “posterity”.

I’m doing some of those things now, using a variety of tools, first and foremost the brilliant brilliant IFTTT, which I – among other things – use to repost all instagram images to my tumblr, tumblr.sunnerdahl.org. Even though it is a tumblr, it’s got my domain address. I’m also using it to trigger on a certain hash tag to repost select instagram images to this wordpress blog. Further, I use IFTTT to save all my posted images on both Facebook and Instagram to Dropbox. It’s also used for cross saving sundry snippets between Readability, Pocket and Evernote.

Though wordpress plugins, I’m cross linking Instagram pictures as well as flickr (which I rarely use these days) ones.

Through different mobile photo apps, such as Camera Plus and Hipstamatic, I cross post to a variety of social media and cloud based storage solutions.

I’m everywhere, but the stuff that I want private, remains private, outside of cloud storage and social media. One just needs to be somewhat vigilant about ones habits, and to be aware that once it’s out, it’s out. 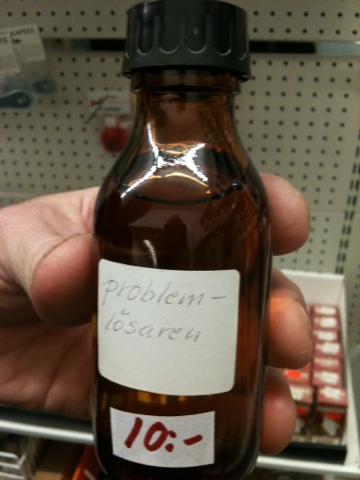 Btw, for the last post, I started to implement the Winerlinks WP plugin, written by Daniel Bachhuber & named after the mighty RSS guru Dave Winer, who credits himself with being one of the first to use them for a blog. The thing about Winerlinks is that it add paragraph-level permalinks, so you can easily direct someone to a specific paragraph via a permalink. Might be useful. If one wrote more posts, more often & were linked to by anyone. :) Also, the paragraph links are only visible on the post page…

This is actually an issue that has disturbed me for a long time: copy protection schemes and how their implementation is killing gaming on what was once known as the “personal computer” (and yes, I include Macs, Windows and even desktop Linux in the blanket term). In many ways, in the days of yore it wasn’t so bad. Sure, copy protection hampered many a music program from working effectively – dongles were lost, dongle calls were poorly written and caused crashes – but games, even BOUGHT games, were usually never a problem. The worst that could happen was that you broke your diskette/cd/DVD if that was the kind of CP scheme used.

Now, things are very different. Hardware copy protection has been superseded by several kinds of online authentication, worst of which are the ones that use the internet to even launch, and those that kicks you out of your game – unsaved! – when the wlan flutters for some reason or other. I mean, what the heck? Back in March, Electronic Arts editor-in-chief Jeff Green tweeted about the crappitude of the DRM deployed in his own company’s Command and Conquer 4. At the time I thought it was irksome, but since I myself hadn’t been confronted with the problem, I wasn’t really irritited.

But then came a good review of an expansion to one of the rare games I bought to play via BootCamp: MassEffect 2. I must say this: I really liked ME2, just as I liked ME. Deus Ex it ain’t, but still very much my kinda game. So I rebooted my computer into Windows 7, managed to pay for the game after a bit of a hassle: Bioware demanded that I register as a user, and I searched thru all my email accounts to see if I could find some sort of login info. No dice. After a while, I surmised that I had never registered the game in the first place and went ahead and created an account and bought the expansion. 1+ gig later and I was ready to rhumba. Or so I thought.

Instead, I was stuck in a Catch-22 kinda situation. Apparently, I had registered the original game to an account when I bought it, but that account was with EA, not Bioware, hence I couldn’t find the login info in my email. Thus, the expansion didn’t launch, throwing semi-cryptic messages at me. Something about “DLC” (which I had to search for to find out that it means “DownLoadable Content”) not being authorized for the logged in user. OK, fine. I managed to change account in ME2, only to realize that I could play the game, but not use any saved games or original DLC. Meaning I had to start a 100-hrs-played character from the beginning or just bite the bullet and call it a loss. I did the latter, but fuck me if I’ll ever buy an EA game again. Oh, they offer to merge accounts for people in my situation. Only $30…

I told my WoW pals about it in our forum, and realized that I wasn’t alone: at least three compadres had experienced very similar problems, with similar degrees of annoyance. So the bottom line is that in a rapidly declining PC games industry, some of the game companies has decided to punish those who DO pay for the games with the most draconic CP schemes I’ve ever seen (and I’ve had plenty experience of copy protection since the early 80s). I mean, what are they thinking? An insider friend once told me that one of their games anonymously reported that it was being used but not bought, and a staggering >90% number was pirated. That doesn’t include those that were blocked by outgoing firewalls, of course. So: declining sales = harsher cp = more problems = even less PC games sold. Do the math.  The winners are those with no cp, or a subscription model, or a relatively simple sales model (AppStore, Steam). The ones with the old mindset are probably moving to console only. Or are well and truly buggered.

I’m trying out the new default theme for WordPress 3. it’s got a bunch of nifty features, but a few changes to style.css had to be done. Adding

seems to have done the trick quite nicely. I also added Menlo as standard code font, as well as reducing its font-size.
For more info on optimizeLegilibility, read Aesthetically Loyal’s post on it. It works best on bigger font sizes, but can be notable with smaller sizes as well.

I guess this is some fairly geeky shit, but I’m finally getting into the git hubbub. In this case, I’m using git to update the Tukui addon for World of Warcraft, a game that I hadn’t played for about 6 months. There were some great instructions for getting it all to work, and that lead me into uninstalling MacPorts and instead installing the speedy Homebrew package manager. Homebrew is just blazingly fast compared to MacPorts, and it all worked very well and dandy until brew install wireshark, which caused me to start an issue on github. Anyways: back to Tukui and WoW.

I must say that its screenshots doesn’t do it justice, and neither does its description. Basically, Tukui is a versatile set of plugins, partly built on ye olde caith ui, all presented via a dynamic interface that changes character after what you do: PvP, PvE or raid. I have some minor beefs with the fonts used – broken fonts seems so 90s – but all in all, it is all very instinctive. Actually, the basics pretty much match the ui I last used myself. The upside for me, but downside for many, is that there are no real in-game config options. Rather, you rely on changing the luas yourself. You don’t really need to change a lot, but I recommend opening World of Warcraft/Interface/AddOns/Tukui/config (use TextWrangler or TextMate) and changing

to these settings. Personally, I enjoy 2 bottom rows (at least until I get the hang of the keybindings again). The layout doesn’t really benefit from right bars, but those are available as well by changing

to a number you like (max 3 with 1 bottomrow, max 1 with 2). Also, another thing that you can’t get via /help is the /hb command, which moves you into keybind mode. A nifty thing with tukui’s keybinds is that you can bind directly into the spell book, without the need to actually have the spell in the bottom bar. I think that’s it. Surely not for everyone, tukui is a very well-balanced package of add-ons. If you’re not afraid to edit lua, of course.